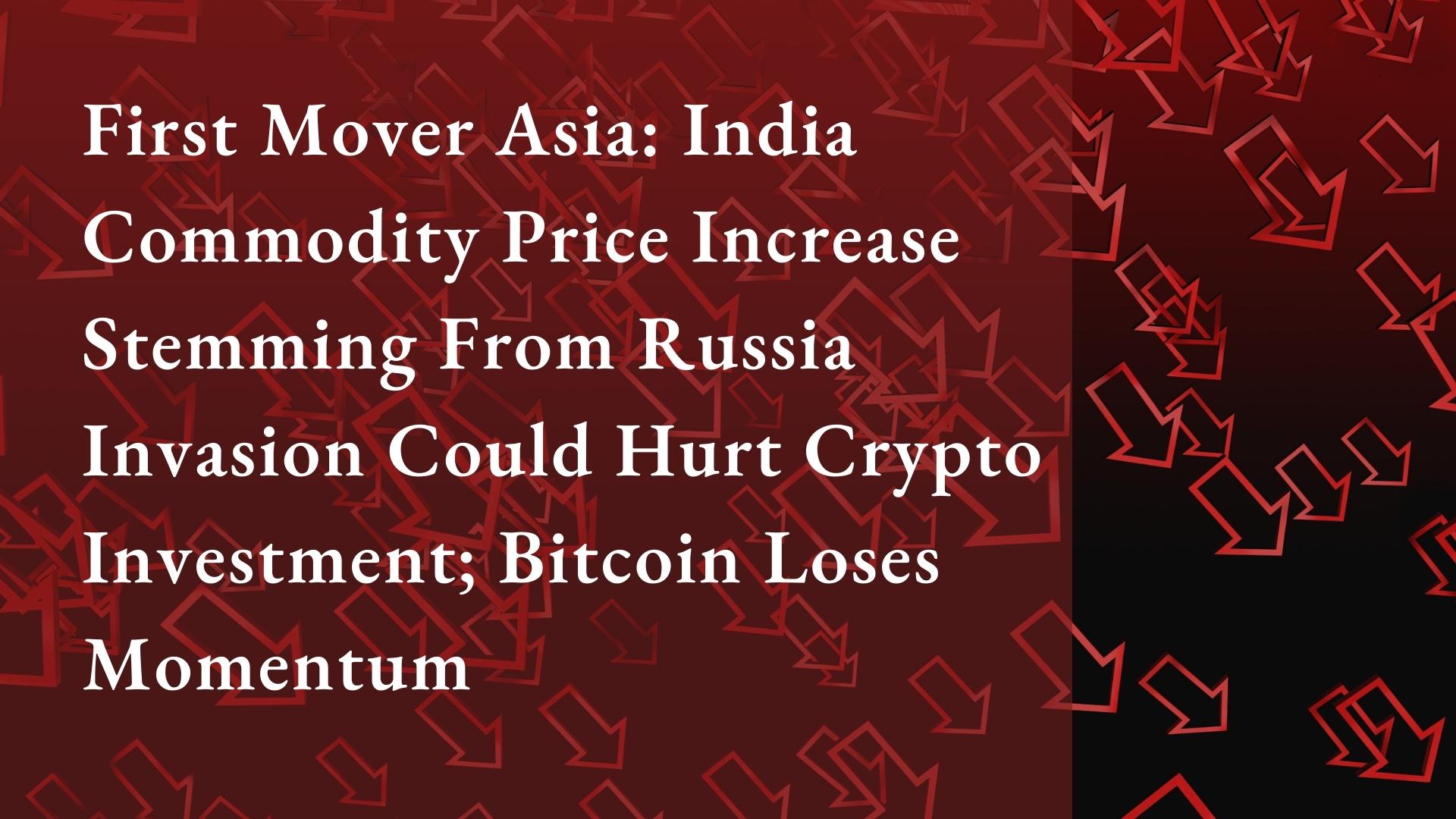 An increase in commodity prices could eat into Indian investors’ skyrocketing appetite for cryptocurrencies; bitcoin, ether are roughly flat for the day.

Markets: Bitcoin’s price slips after the powerful rally earlier in the week appeared to stall.

Insights: Russia-Ukraine war starts to affect Asian economies in ways that could ripple through the crypto industry.

The Russian invasion of Ukraine is still in its early days, but it is already starting to affect Asian economies in ways that will likely ripple through the crypto industry.

Commodity prices rose in India, which is one of the biggest importers of Ukrainian sunflower oil. An increase in commodity prices could eat into Indian investors’ skyrocketing appetite for cryptocurrencies. India remains one of the world’s largest crypto markets in the world thanks to a young populace and rising disposable incomes. Some 20 million Indians signed up for trading accounts in 2021, according to a January Economic Times story. CoinSwitch Kuber, India’s largest crypto exchange, saw a 3,500% rise in transaction volumes and reached 14 million users recently.

The country, which relies on Russia for about half its arms and other military equipment, has been cagey in its response to the attack. It was one of just 35 countries on Wednesday to abstain in a U.N. General Assembly vote to condemn the Russian action. (Five countries, including Russia, voted against the resolution.) Last week, a number of officials even suggested they might help Russia bypass sanctions by establishing rupee accounts for executing trade transactions.

China, Pakistan and Vietnam, another large importer of Russian military hardware, also abstained eight years ago in a vote condemning Russia’s annexation of Crimea, which some Russia experts have said foreshadowed its Ukraine goals.

Elsewhere, Taiwan’s native dollar saw further suppression from traders as markets weighed the possibility of China, emboldened by Russia’s attack, ratcheting up its military presence around the island.

In Malaysia, crypto exchange Binance announced a strategic investment in local exchange MX Global, one of the four recognized market operator-digital asset exchanges that received full approval by the Securities Commission Malaysia in July 2021. Malaysia’s crypto market is in its early stages but it is also growing, with local startups like analytics service CoinGecko becoming some of the most-used crypto service providers tools in recent years.