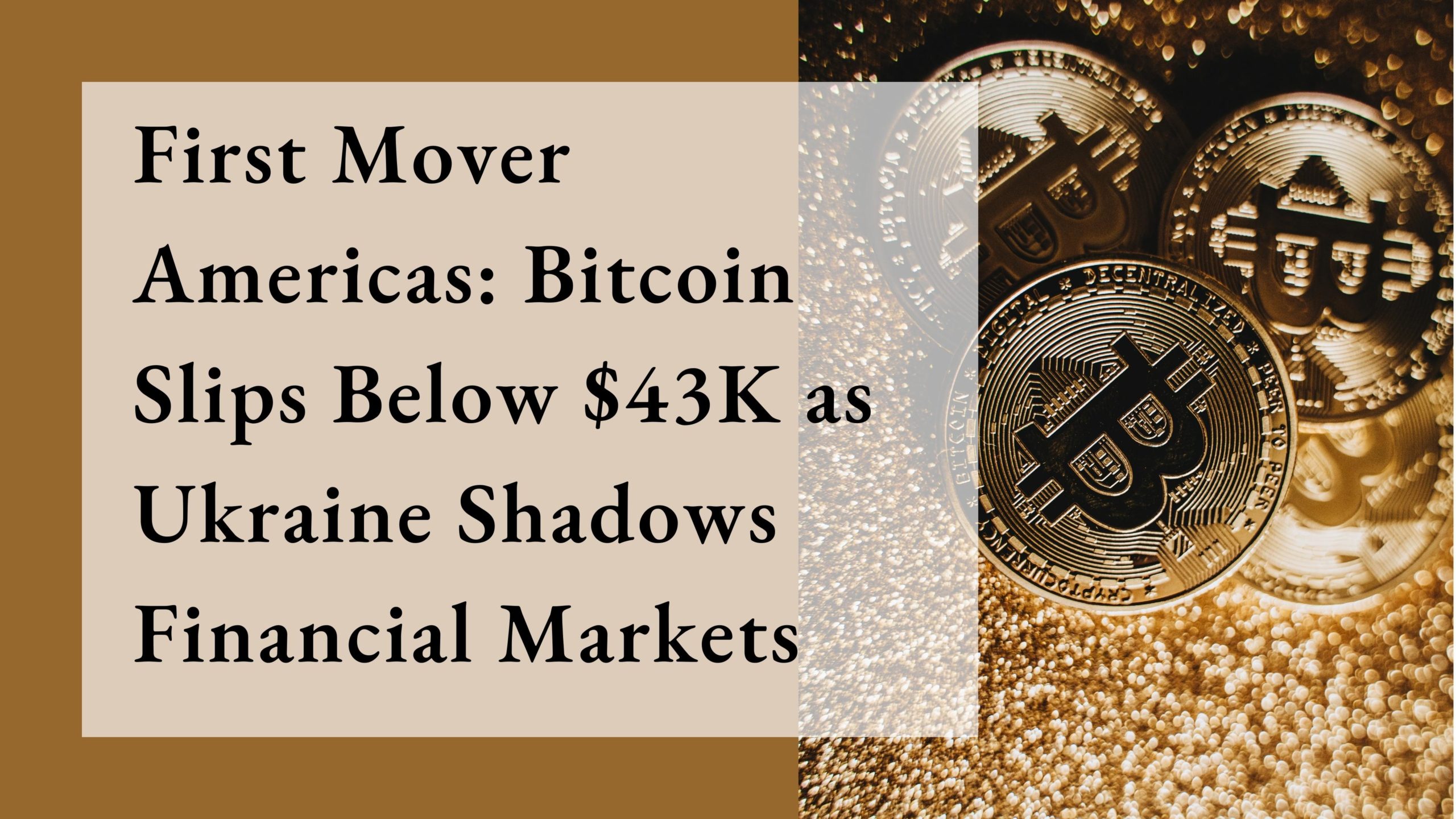 Bitcoin was trading flat to negative even as the European stocks and the S&P 500 futures got a slight tailwind from reports that the U.S. Secretary of State Antony Blinken has accepted a meeting with Russian Foreign Minister Sergey Lavrov late next week; subject to “no further Russian invasion of Ukraine.”

The cryptocurrency saw a minor bounce earlier but failed to retake the bullish trendline. The daily chart relative strength index has dipped into a bearish territory below 50, suggesting scope for continued decline.

A long holiday weekend in the U.S. and a great geopolitical uncertainty is likely to keep risk appetite in check during Friday’s North American session, as Bannockburn Global Forex’s Marc Chandler said in a blog post. U.S. financial markets will be closed on Monday in observance of Presidents’ Day.

Some analysts foresee a deeper decline if geopolitical tensions escalate further. “Bitcoin is the ultimate risky asset, and a Ukraine invasion would keep crypto selling pressure going another 10-15% over the short-term,” Edward Moya, senior market analyst at Oanda, said in an email.

Besides, the Fed rate hike fears and regulatory concerns might keep bullish moves, if any, under check.

Calls for a 50 basis point interest rate hike in March have grown louder following the data released early this week, showing that U.S. consumer price inflation rose to an annualized 7.5% in January, the highest level in 40 years. The Fed funds futures are priced for five rate hikes this year.

According to a report by Yahoo, President Joe Biden could issue an executive order next week directing government agencies to study cryptocurrencies and a central bank digital currency (CBDC) and come up with a strategy to regulate digital assets. The President’s working group on financial markets is already scrutinizing systemic risks posed by stablecoins – dollar-backed cryptocurrencies.

“Uncertainty for stablecoins is a short-term negative for cryptos, but overall long-term growth for the crypto-verse will embrace U.S. regulation,” Moya said.

DIA, an Ethereum token governing the open source Web 3 data and oracle platform Decentralized Information Asset (DIA), has been up 30% in the past 24 hours.

The bullish move comes after DIA announced that it would include the UK FCA-regulated crypto index provider CF Benchmarks’ reference rates as feeds in its data offering. CF benchmarks is one of the leading crypto index providers whose Bitcoin Reference Rate is used by the Chicago Mercantile Exchange to settle bitcoin futures and options.

“ETH and SOL reference rates will be provided to both Ethereum-native and Solana-native developers. The availability of institutional-grade, Benchmark Regulation compliant reference rates will enable secure development of new financial products and services underpinned by resilient and robust methodologies in Web3,” DIA said in a blog post published Thursday.

Bitcoin is just 13 years old with hardly any historical data to look into for clues on how it may perform during the impending Fed tightening cycle, widely expected to begin next month.

However, the dollar and stocks might help in this case. Past data shows the greenback typically peaks after the first Fed rate hike. A strong dollar is generally considered bearish for bitcoin and vice versa.

According to Bloomberg, the S&P 500 has averaged a 9% gain in 12 rate-rising cycles since the 1950s. With increased institutional participation since March 2020, bitcoin has moved in tandem with the stock markets more often than not.

So, bitcoin could regain poise following the March rate hike unless the central bank raises borrowing costs by 50 basis points or more and keeps doors open for four more hikes by the year-end.

According to Dan Morehead, CEO and founder of Pantera Capital, bitcoin could be the best place to park funds during the Fed rate hike cycle.

“I think our markets will decouple soon. Investors are going to think: bonds are going to get crushed as the Fed goes from the only buyer on Earth to seller. Rising rates will make equities and real estate less attractive. So, where does one invest when both stocks and bonds are falling? (Normally they are negatively correlated.) Blockchain is a very legit place to invest in that world,” Moorhead said in the newsletter published on Feb. 16.

Data tracked by CryptoRank show that unique active wallets connected to gaming surpassed those associated with decentralized finance (DeFi) in 2021 and accounted for 49% of the blockchain industry’s usage.

“Gaming has become one of the biggest growth areas in crypto. The first wave of games are Play to Earn (P2E) like Axie or DeFi Kingdoms because they are easier to deploy, requiring less intense graphics and mechanics,” Ilan Solot, a partner at the TagusCapital Multi-Strategy Fund, said in an email.

“The main appeal for P2E is participating in the game’s economy in some way, so, naturally, many DeFi users (especially yield farmers) would quickly jump on board. There is a lot of overlap,” Solot added.

While gaming sector is booming and often considered recession proof, the fortunes of gaming tokens and other sub-sector coins remain tied to bitcoin, perhaps due to a lack of education across retail and new professional investors, as Arca’s Jeff Dorman pointed out in a blog post published last month.

“Many digital assets should behave more like consumer staples than profitless tech companies due to the high revenues and cash yields, but the market doesn’t seem quite ready to draw a distinction between tokens of recession-proof gaming companies (e.g. AXS) and high cash flow exchange companies (e.g. FTT, SUSHI) versus protocols with no cash flows (e.g. BTC) or early-stage products with little fee generation (e.g. SOL, AVAX),” Dorman said.